How to Introduce A Ram Into An Existing Ram Flock 2.0 (Video) 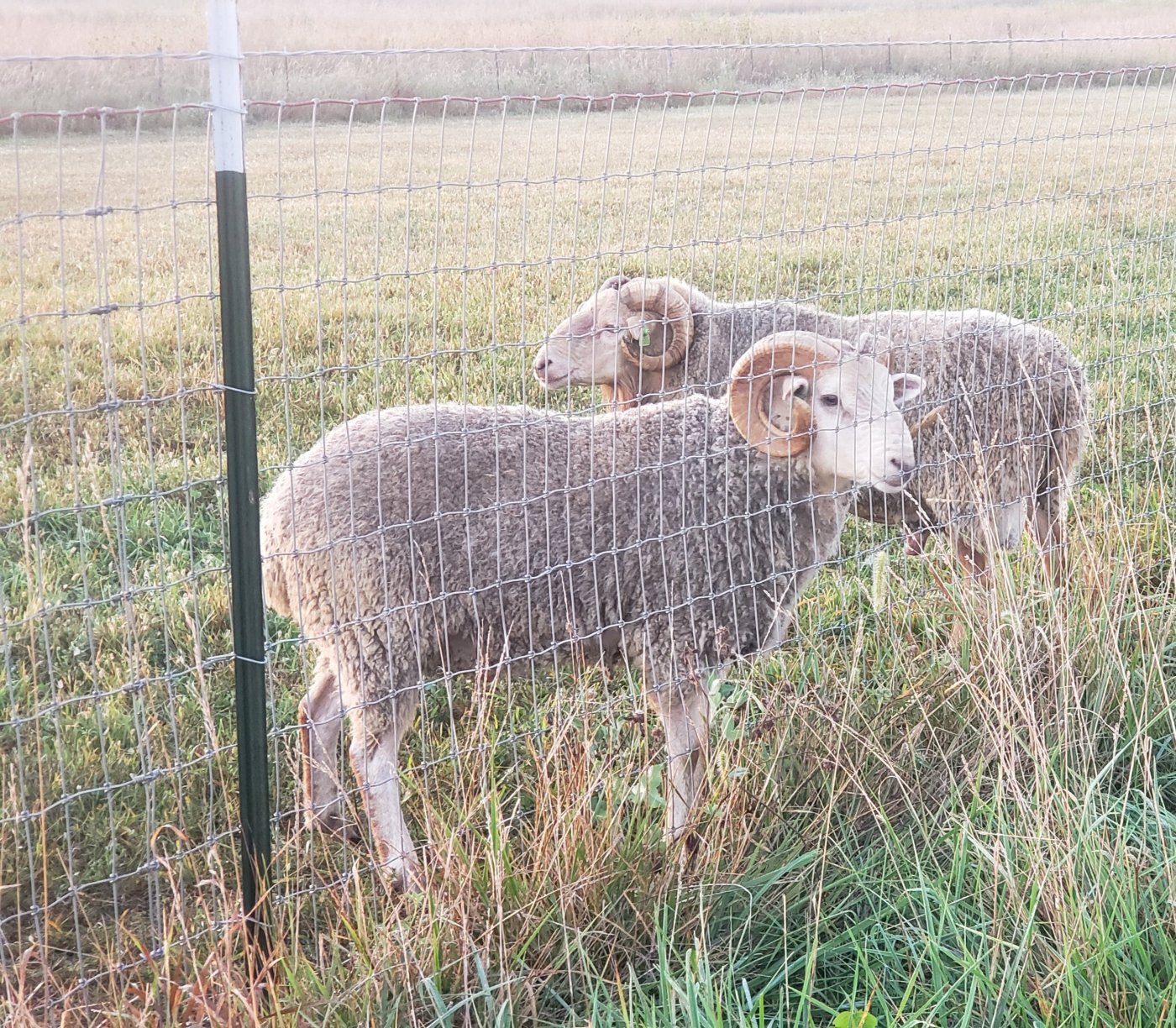 I’ve written about this topic before, but we’ve learned a lot since.

We currently run a flock of five intact rams and two wethers; the primary ram (sire) and his six sons, which are all brothers or half brothers. Last year we had to add two ram lambs, Hawk and Heron, into the existing ram flock right before breeding season. We had no choice as we were short on paddocks. We chose to supervise the entire ordeal and, ultimately, they worked out their pecking order amongst themselves.

The two ram lambs are brothers, both have a set of horns, and probably weighed about 75% of the weight of the mature rams. The wethers, our linebackers/”buffers”, outweigh the biggest rams by about 65 pounds and are the biggest! Here is a video of the introduction:

Since that time, we’ve had to remove a mature ram for breeding, a shearling ram because he was lame, and a wether due to a skin issue. When it came time to return the mature ram, we just guided him across the alley and right back in with the flock. The rams recognized him and they went round and round sniffing, licking, legging, mounting, and growling/snorting at him, but he was accepted back easily enough.

When we returned the shearling ram and the wether to the flock (they were stabled in a hospital pen together for one week), we decided to try to put them into the ram stall in the dark. So, we waited until it was fully dark and ushered them across the alley, by the light of only a single cellphone, and back into the ram stall. The rams couldn’t see very well, so they all had to adapt to each other via smell and touch only. It went smoothly and we didn’t notice any injuries the next day.

Understand, there will be a pecking order in a ram flock. Sometimes the pecking order changes and a different ram will come into power. From time to time the rams, even the wethers, will spar for whatever reason. We, of course, work to minimize as much of this as we can by not creating events that set off these sparring matches (e.g., don’t walk a flock of ewes by outside of the ram fence).

Sometimes they draw blood when they ram each other. Injuries may include: headaches (they stand very still and tuck their chin towards their chest), cracked horns, lost horns, bruised ribs, pulled tendons or muscles, etc., but we accept a lot of these minor injuries as par for the course as these injuries typically heal quickly and without complications. Around breeding time things always get more tense (from August almost all the way to the end of the year). If we notice an abrasion or a bleeding horn, we use Blue Kote or Wound Kote (an antiseptic spray) and sometimes Wonder Dust (if the bleeding needs a styptic powder to help it stop bleeding). We continually monitor for signs of infection and inflammation and will treat accordingly with antibiotics and/or anti-inflammatories, and we may even choose to remove the sick or injured sheep from the rest of the flock for a period of time in order to recuperate.

Our ram pasture is fenced in 2″×4″ no-climb 48″ tall woven wire (way better than the situation of electric mesh at the end of the summer with a high weed load); they cannot get their horns stuck. They will push on it/ram it, but the fence holds up quite well. They have battered the metal walls of our barn on either side of their stall doorway – a bit more than normal wear and tear – and the stall door itself (at least it still closes)! We have discussed putting up old tires around the outside of their stall door, like rubber bumpers at a boat dock! Maybe the rams would just bounce off then?!

Most of the time the ram flock is a peaceful brotherhood. They crave the comraderie and enjoy grazing together, lounging together in the stall under the fan during the summer, and hanging out together knee-deep in their hay during the winter. They are all definitely more friendly towards us than the ewes are to us, come running for treats when you call their names, and sincerely love to be endlessly scratched all over.

One thought on “How to Introduce A Ram Into An Existing Ram Flock 2.0 (Video)”