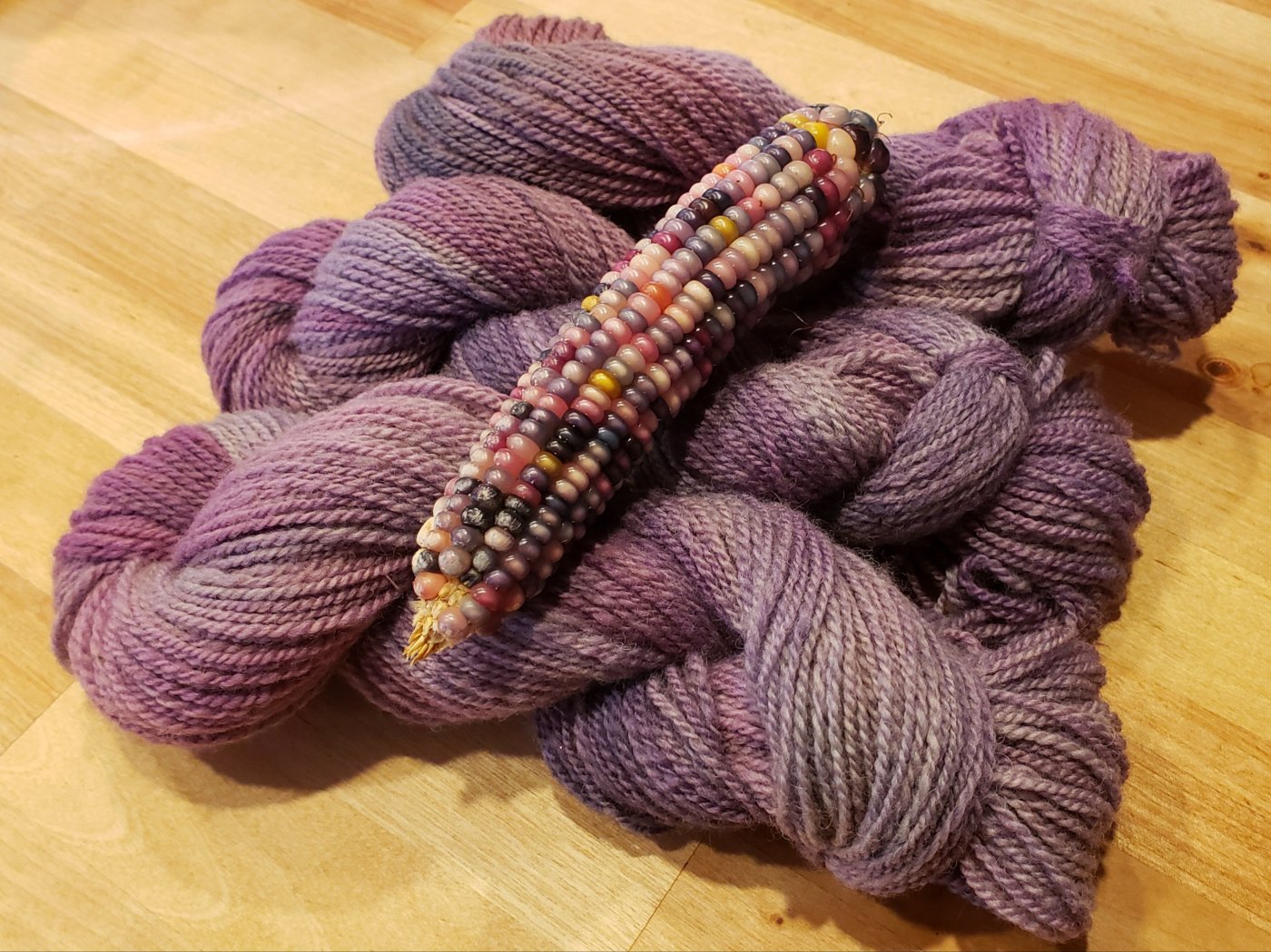 Since I am inundated with elderberries, I decided I should dye some yarn. I am very interested in natural dyes and have previously dyed with blueberries (see my previous post Blueberry Yarn). I would love to dye with indigo, but I’ve been reading that it is actually considered an invasive weed out west, which is worrisome for me. I don’t want to plant indigo and have it get out of control here.

After picking the bundles of elderberries, they needed to have the stems removed. This was the tedious part and took a couple of hours to yield about 3-4 pounds of elderberries. I took a break by covering my metal bowl really good with plastic wrap and keeping it in the refrigerator. The berries don’t store well, so the sooner I got them de-stemmed, the better. It took me a few days to get them prepared and they were still good. Once I got them off the stems, I placed them in a 4-quart stainless steel pot.

First, I mashed the berries with a potato masher really good until I get some liquid on the bottom of the pan. I then brought the berries to a simmer on medium and then reduced the heat to low and simmered for 10 minutes. The berries released even more liquid as they cooked. I stirred occasionally.

I strained the seeds and pulp from the liquid by pressing the seed pulp through a fine mesh sieve with the back of a ladle into a large measuring cup. I then discarded the seed pulp. I strained the liquid again through cheesecloth and a fine mesh strainer into a large cast iron skillet. I had to use the back of a spoon to move the fine berry pulp out of the way to get the liquid out the bottom. I frequently rinsed my cheesecloth out in between ladle-fulls.

To facilitate good bonding of the dye to the wool yarn, I decided to use a mordant on the yarn prior to dyeing. I filled a 4-quart stainless steel pot with hot water. I dissolved 1.5 teaspoons of aluminium sulfate (food grade alum), the mordant, into 1 cup of hot water and then added it to the stainless steel pot. I also dissolved 1.75 teaspoons of Cream of Tartar into 0.5 cup of hot water and added that to the stainless steel pot as well. I stirred the liquid to incorporate and then carefully added 6 ounces of yarn (3 open hanks of yarn) by slowly pushing the yarn underwater with a utensil to make sure it was wet and all air bubbles had risen out of the liquid. I heated the yarn in the pot on low heat for 45 minutes. I then let the liquid and yarn cool somewhat until I could pour off the hot water. I then carefully rinsed each hank of yarn in hot water and gently wrung it out.

Next, I carefully placed each hank of yarn into the dye bath until they were all equally under and in the dye, pressing with a utensil to remove air pockets and to make sure the yarn was fully saturated with dye. I heated the dye and yarn in the skillet on medium until it simmered, and then reduced the heat to low and simmered for 45 minutes. I then turned off the heat and left the yarn in the dye, in the skillet on the burner, until the next morning, never moving it.

The next morning, I removed each hank from the dye and squeezed it out. I placed all the hanks into a large bowl and rinsed them multiple times in cold water, until no more dye came out. I gently wrung out each hank and hung them to dry on a clothesline outside in the shade. By evening, they were dry and I wound them back up into twisted hanks.

I was a little surprised how light of a color they came out, but I was pleased with the variegation. Wherever the yarn was touching the cast iron it turned out darker, and wherever it wasn’t touching the skillet turned out brighter and warmer in color. I’m excited to crochet it into something now!