Glass Gem: A New Tradition For Me 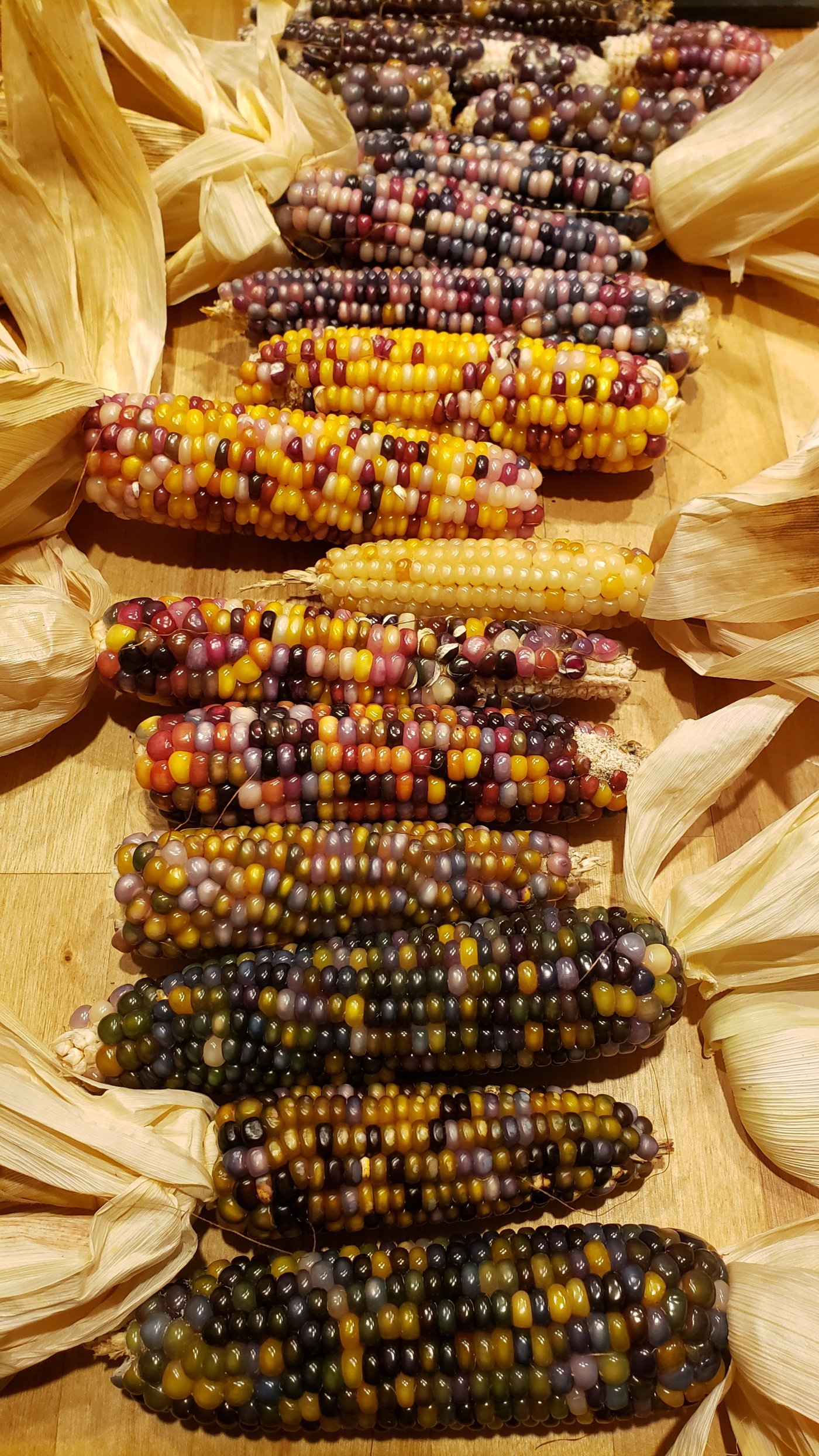 Last year I was inspired by an article I read in a magazine that highlighted the Lipscomb brothers of Bayou Cora Farms in Alabama and their heirloom corn that they have been growing on and off over the years since 1875. Their flint corn is beautiful and I had to try it. I quickly ordered some cornmeal, grits, and corn flour from them. Around the same time, I saw pictures of Glass Gem. I was spellbound and decided I wanted to try growing Glass Gem.

According to Native Seeds/SEARCH (NS/S), Zea mays (maize) was domesticated in Mexico by 6,700 B.C. Glass Gem, a type of maize, was selectively bred by Carl Barns, a Cherokee farmer from Oklahoma. The seeds that I used were from NS/S, gifted to NS/S by Bill McDorman who got the seeds from Greg Schoen, one of Carl Barns’ students. There are generally three main types of corn grown in America: 1) dent (field) corn, 2) flint corn, and 3) sweet corn. Glass Gem is a popcorn, a certain type of flint corn, and is an heirloom variety.

To start, since I’ve never grown corn before, I decided to grow two rows of 50, each plant spaced 12″ apart. I chose a spot in my new garden area this last Spring, which I had cleared by mulching a scalped grassy/weedy area with soiled horse bedding (wood shavings and straw) and then covering it with a silage tarp, black side up, for a few months. I will admit there were a couple of areas where I mulched with soiled chicken bedding. Needless to say, the compost was probably uneven, nutrient-wise, at best. I waited to plant the corn until the last week of May. I can confirm I had a 97% germination rate as I only planted one kernel per plant.

I tried to make sure they got around 1″ of water per week the whole way through their growing season. There were a couple of sections that never grew very good, which I attributed to inconsistent compost. I also tried to keep as much grass out from in between the plants as possible. The summer was unusually hot and dry here with very little rain in July, August, and September – temperatures were often in the 90s with heat indices over 100 degrees Fahrenheit. We had a flush of Japanese beetles eating on the silk and the top of the cobs, which was closely followed by large grasshoppers that munched down on the leaves and the husks. Challenging conditions, to say the least.

I started harvesting ears with mostly dried husks the first week of September. Every ear you shuck is a pleasant surprise! It seems each plant is unique and produces a unique color pattern/motif. The corn kernels can be brightly colored, pastel, complimenting colors, clashing colors, mostly of one color, or marbled like jelly beans. It was very entertaining to shuck a whole bunch in one sitting to see the variety produced.

I have been hanging the ears by their husks in bundles or leaving them laying individually in a basket in the open air to dry. The bundles would make great Fall decorations! For storage, I would probably just hang the bundles of ears downstairs in the basement where the temperature and humidity are lower. I’m going to save seed for the 2023 growing season, but I will also save the same amount again for a 2024 growing season contingency plan. I’m aiming for 200 stalks this next go around.

I’m definitely going to grind the excess corn into cornmeal, grits, and maybe even try to learn to make masa harina. I’m also interested in learning to make pinole and corn tortillas/chips. Last, but not least, we will definitely be popping some for popcorn!

I also feel like Glass Gem motifs could be great inspiration for dyeing yarn. I recently dyed yarn with elderberries and was shocked by how much it matched the Valentine’s Motif!

2 thoughts on “Glass Gem: A New Tradition For Me”